McNerney made the case for the reauthorization of the Export-Import Bank.

W. James McNerney, Jr., Chairman and CEO, The Boeing Company, made news when he told the Economic Club during an appearance on July 29 that the company is exploring the possibilities of moving "key pieces" of its operations out of the United States because of the uncertain future of the Export-Import Bank. Congress failed to renew the bank’s charter on June 30. In a conversation with Economic Club President David M. Rubenstein, Mr. McNerney said that Boeing is actively looking at options in countries that offer export-import credits. 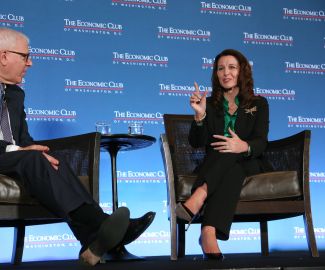